Have you met my BFF Nima? 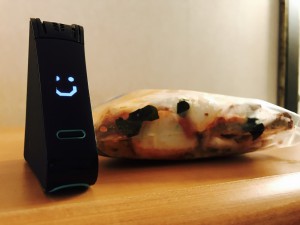 If you have celiac disease, then you know the scene well. Someone bakes gluten free cookies for you in their very not gluten free kitchen or a server insists they know all about cross contamination and have it covered. You’re left measuring your anxiety and weighing the pros and cons. Enter Nima, your new dining partner that does the assessing for you.

Nima is a portable device that lets you know in about 3 minutes if a food contains gluten. Yup, for real. I recently wrote about an epic road trip my celiac family went on. You can bet that our Nima was first on our packing list.

Whether it’s for a vacation, a restaurant or a party, Nima has made it easier. Here’s how we’ve used it so far:

I don’t know about you, but when a server is so confident that they know everything about celiac I immediately assume they know far less. When this happened at a (very nice) restaurant recently, we went for it and tested my husband’s filet. When it tested positive for gluten our server suddenly was willing to learn a bit more.

A tea cake from the farmers market, cookies from gluten free section of the local bakery, a mom at a birthday party. Our friends see gluten free items and think of us, which is very sweet. While we appreciate it, we also know that these foods may not actually be gluten free. Thank you Nima…

…because we just wanted to be sure.

There have been so many times (generally on a weekend when I can’t call a company) that my son has been given something and wondered if he can eat it. Thankfully he only has to wait about 3 minutes to find out.

We love Thai food and since it’s easy to make with fish sauce (instead of soy) and rice noodles (instead of wheat) it can be a good gluten free option…that’s if you can be sure that it’s actually only made safely. We had stopped ordering from our favorite local Thai place because we weren’t confident it was a safe choice…until Nima came along. Bring on the Pad Thai!

I know our BFF Nima will be with us on our summer trips and backyard barbecues. Thinking about picking one up for yourself? Take advantage of this $25 off with the coupon code “STOWELL” (expires 5/19).